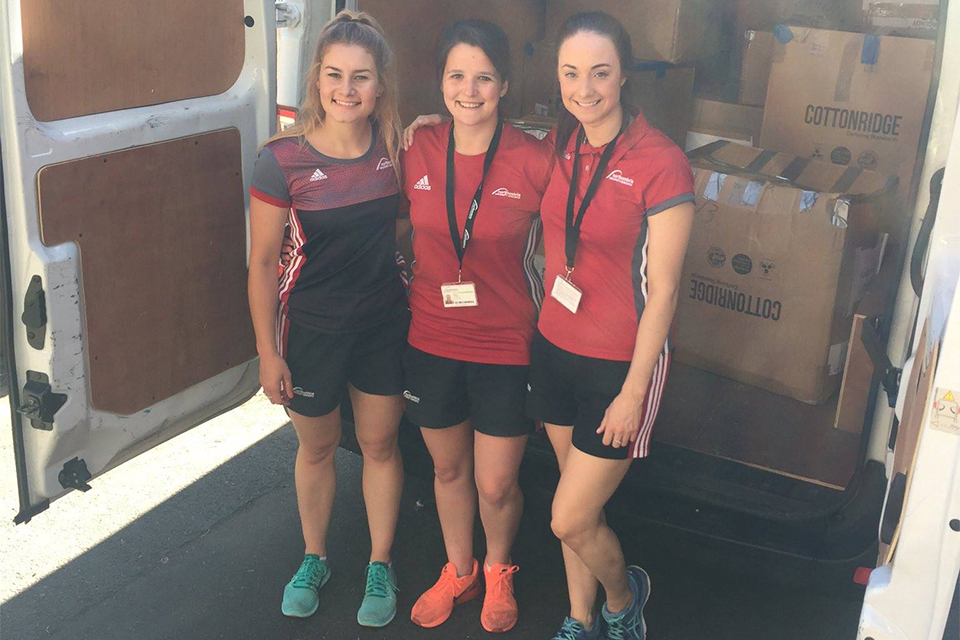 We campaigned, we donated, we did it!

The 2017 Sports Kit Appeal goes down in Wallace Group history as the biggest and most successful to date. In just over 30 days, the 7 UK universities and their partner organisations and contacts managed to fill a 40-foot shipping container with thousands and thousands of items, including; clothes, shoes, sports equipment, bikes and even a trampoline!

The 2017 kit appeal is part of the wider #Zambia5050 event, which will see Olympian Adam Peaty and GB swimming coach Mel Marshall join our volunteers in Zambia this Summer for 50 hours of sport over 5 days, in the hope of raising £50,000 to support the work of Zambian NGO Sport in Action.

During the launch of the #Zambia5050 event in Loughborough it was agreed that a kit appeal had the potential to be huge, but would take a lot of work to be successful. We knew that if the campaign was going to succeed we needed to get some big names and sponsors behind us, and so collectively we set about using all of our contacts across the UK. In the end, the campaign attracted attention and donations from many national governing bodies, including Team GB, British Swimming, British Basketball, England Netball, England Cricket, and Scottish Golf.

Campaigns were run at each of the 7 Wallace Group universities across the UK and included trips to local primary and secondary schools, leisure centres and university shops. This proved very successful and saw whole communities, clubs and schools coming together to help out and gather equipment.

Whilst delivering an assembly to a primary school in St Andrews I was overwhelmed by the response I got from the children and teachers there. They were all practically jumping out of their seats to ask questions about how they could help contribute to our campaign.

The appeal on the ground was accompanied by a strong social media campaign to increase the reach across the UK. One snazzy video and poster later and the internet campaign had begun!

Every day my phone was buzzing with notifications from Facebook and Twitter about where and when people could drop off various items of sports equipment and clothing. Weekly Facebook and Twitter posts allowed people to engage with the progress of the campaign as well as see where their kit will be going in Zambia.

The campaign was a tribute to what teamwork can achieve when a common goal is put in place. Colleagues from across all 7 partner universities worked solidly on the night of Monday June 19th (deadline day) to ensure all kit was donated, packaged and properly catalogued before being shipped to Zambia.

Loughborough University acted as the hub for all kit, with colleagues driving vans full of kit (on the hottest day of the year!) from St Andrews, Stirling, Northumbria, Durham, Bath and Cardiff Met University.

In the end, we collected: 2 full size football goals, 270+ boxes of clothes, 2 lacrosse goals, 10 gym mirrors, 2 bikes, 1 tennis net, 2 spin bikes and 1 trampoline. All this kit is set to arrive in Zambia in August and you can follow its progress, from container to each placement, by following the Wallace Group on social media (@WallaceGPZambia).

On behalf of the Wallace Group and our Zambian partners Sport in Action, I would like to express a huge THANK YOU to everyone involved in the 2017 Kit Appeal. We couldn’t have done it without you!

Thank you! Or rather… Zikomo!

This fantastic opportunity will run from the 23rd May to the 3rd October 2020. Role…

“The hubs give Sport In Action the ability to reach more girls with the Girls In Action programme, it enables us to identify and train more GIA leaders, it organically grows an ever strengthening GIA team with a large pool of ambassadors and trained leaders.”

“These netball sessions are so impactful, they are keeping our youth, safe, occupied and giving them a chance to progress in their lives. They are learning to become better people, through what we have here now.”

"When we played basketball growing up at Munali, there was about 10 girls that trained on a weekly basis. Now as the leaders/coordinators of the Munali Girls Basketball Hub, we get to change the lives of over 100 young girls and 10 young leaders now newly engaged in sport because of the hub site.”

”Before the Hub, I had never played basketball. Now I have improved enough and can coach it to over 150 children. Through the hub I’m doing my part in the world.”

“The Hubs have helped to reach so many more children. What SIA does is great, and so is the impact. With the hub structure you are multiplying that impact and those reached by massive numbers.”

"Volunteer Zambia is an amazing programme for many different reasons but the people made my experience. The fellow volunteers in the programme that you meet are so influential and they become your best friends."

“Volunteer Zambia was one of the best experiences of my entire life, I would recommend anyone who is interested in sport and development to go!”

“I’ve learnt that most things are possible if you put your mind to them. Getting around Zambia in a wheelchair was a challenge at times, but with the help of other members of the group, I managed to do everything I was hoping to. I hope to work for the Foreign Office or an international NGO after leaving university, and believe Volunteer Zambia will improve my chances of getting this type of job. I would encourage other students to get involved, as they certainly won’t regret it! Volunteer Zambia has been one of the best experiences of my life and seeing just how grateful the players are really makes it worthwhile.”

“The overwhelming aura of community is contagious, there is a general sense of ‘tough love’ but in my opinion this breeds resilient youngsters and as a result strong independent young adults. The opportunity I had as the staff member for the UKSport IDEALS project is an extremely unique one and I cannot thank both the Wallace Group and UKSport enough. Thank you for a once in a lifetime opportunity I will treasure the memories!”

“Zambia was a life-changing experience for me. I will never forget the opportunities I had, the friendships I made and the children I coached. It will always be close to my heart.”