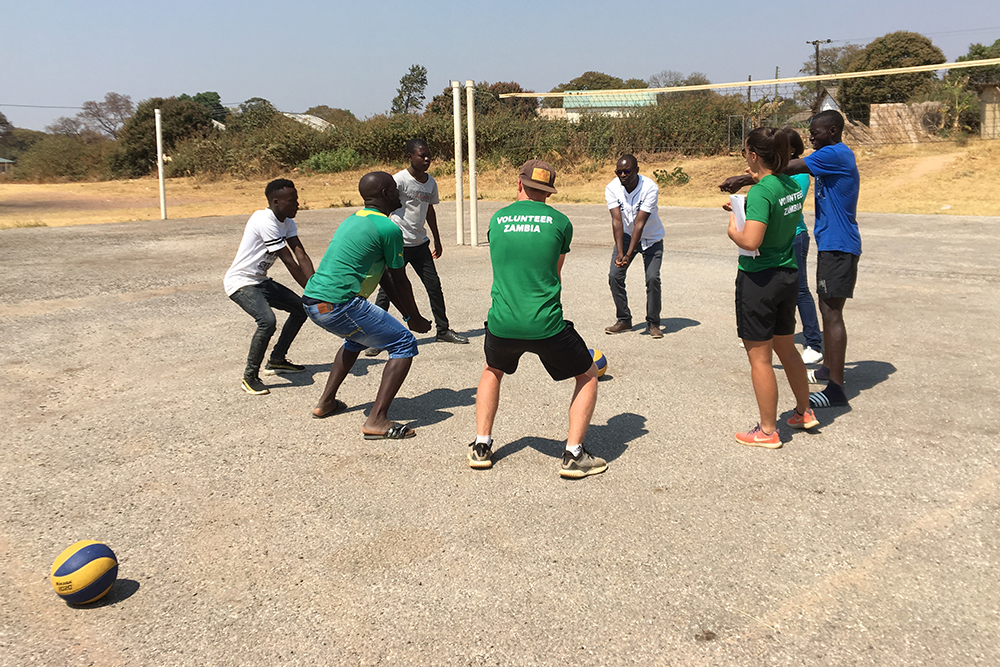 Week 4 began with the end to our amazing Livingstone trip. A little fatigued after the sunset cruise the evening before, ZamFam Group 2 headed out to experience Victoria Falls in all it’s glory. I was fortunate enough to not have the 6am slot, so when my team hit the national park at 9 the sun was up and the baboons were out. Our ‘walking safari’ took us 30 minutes to trek to Devil’s Pool along the edge of the falls, before plunging into the falls themselves, and hanging over the edge with all our trust placed in the Zambian holding onto our legs behind us!

A million and one photos and not enough time later, we had to trek back, one Wonder of the World richer. With the little time we had left Silvia and I headed out into the park to get the best views of Victoria Falls, to now see what we had been dangling over. The trip ended early afternoon as we all loaded into the bus for another 9-hour drive.

Straight back into the thick of it, Tuesday morning opened with the Wallace Tournament coordinators having their first meeting at the Sport in Action office. With Alejandro at the wheel the discussions were detailed, and full of discussion to emphasise the importance of the tournament’s and SIA’s values. There is a lot of work to be done before the big day in week 6, but definitely a productive start. 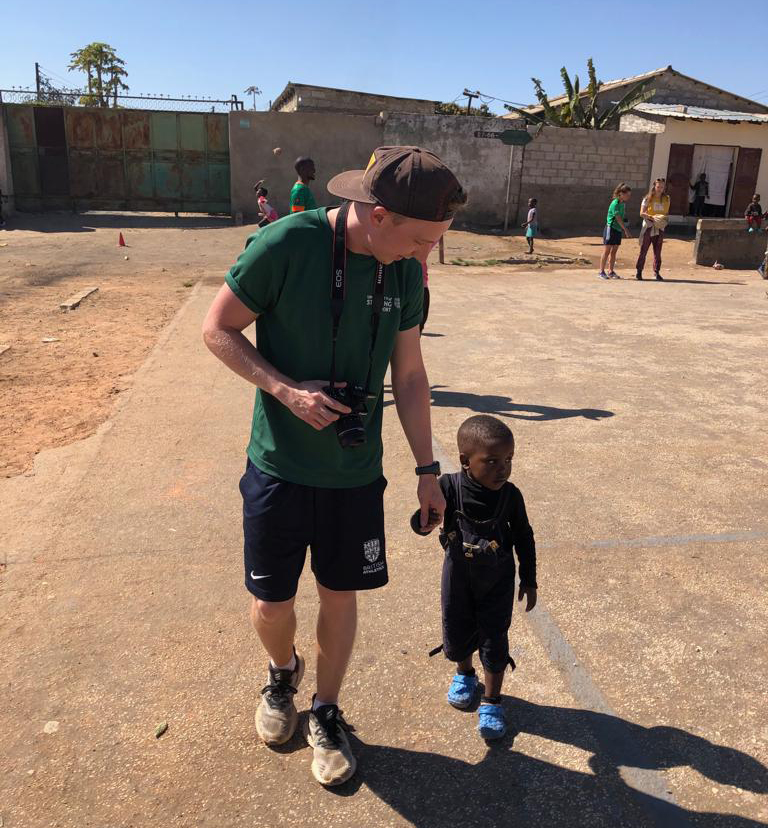 The day allowed for a quick lap around the Kabwata market, where we could say hello to everyone’s favourite tailor, and allow Dec to make his daily appearance at the nshima place.

Being the outreach officer for Munali volleyball, the afternoon constituted of Silvia and my regular trip to the Munali Courts; Tuesdays involve the boys and girls’ talent teams, as well as the flourishing Hub team. Silvia and I put a lot of effort into getting kids from the local schools involved in the Hub, so it was good to see another decent turnout, with new kids taking their first steps in volleyball, and others perfecting that spike.

As Silvia took the talent teams, my stand out performers for today were 10-year-old Natasha (soon-to-be my budding assistant coach) and Crocodile (who’s real name I kept forgetting, but this got a laugh so that may now be his name forever).

We found an undiscovered gem on our Wednesday morning session. After weeks of trying to get together the Mumana Primary team that we had heard murmurings of, Silvia and I finally had our first session with what turned out to be an excellent team. School Prefect Kennedy led the session and was a pro in the making. The team were very respectful and really utilised the rock/dirt court they had outside their school. Both boys and girls showed up to give us at least two teams at training; giving us the luxury of a Mumana team going straight into the Wallace Tournament schedule. 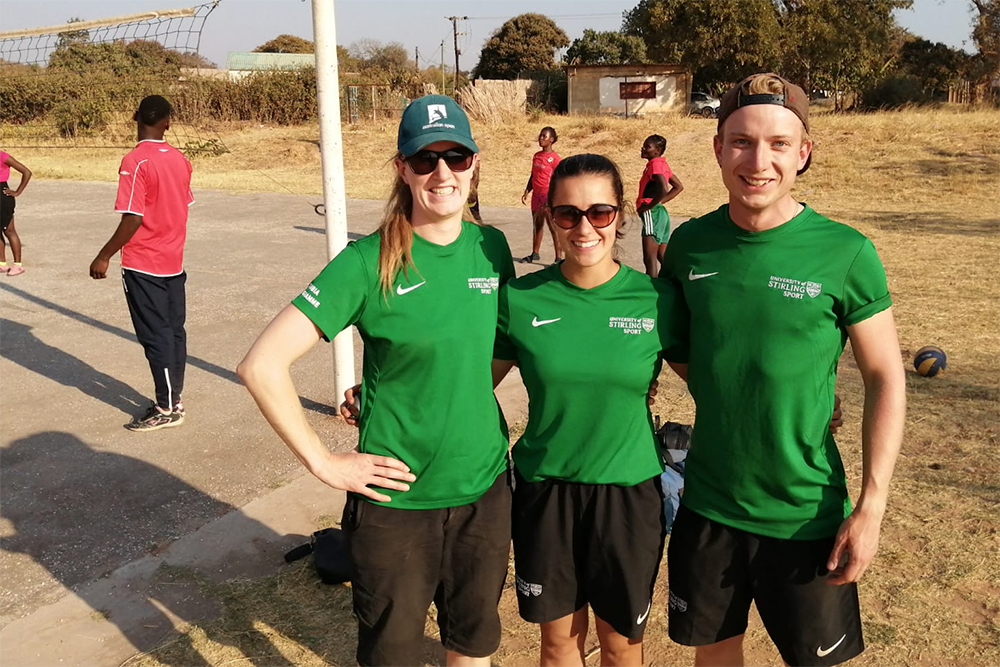 We had a successful afternoon session with a few of the Munali talent team before heading back to the house to welcome Amy, University of Stirling’s staff member, to the ZamFam. No time to peacefully settle in though as we hosted Loughborough’s VC Bob, his family, and Durham staff to the house for a meal. Abby’s cookies can win anyone over.

Thursday brought the super exciting task of renewing visas in town. It required an early rise, but at least it was another stamp in the passport. Any trip to town is not complete without a visit to at least one football shirt shop, where I’m pretty sure Jamie hit double figures for his knock-off football kit collection.

On Thursday we had a fairly disappointing day at the volleyball, as mock exams and school holidays messed with our newly formed schedule, meaning Silvia and I did not take the morning or afternoon sessions with Tunduya Primary. Fortunately for us, the enthusiasm of the Munali Hub girls salvaged the day.

Friday brought the long-awaited Volleyball Workshop that Silvia and I had been working on for a while. After our first attempt was cancelled in week 1, we had a lot of time to mull over our session. It was another slow starter as the 10am start actually begun at 11am, but gathering together 7 people from the area including a few schoolteachers was considered a real success.

A practical session displayed the progress that all our attendees were making, everyone got involved, and it was great to see in latter weeks how our volleyball peer leader, George, had developed his session planning since the workshop.

Friday means both talent and hub teams again, and as we edge closer to the Wallace Tournament we pushed the Hub team towards actually passing the ball to one another before smacking it over to the opposition. The talent were showing why we call them that, and across the two hours we got to witness where the Hub team were at, always improving.

Sadly this was the last day in Zambia for Ellie this year, as we said our goodbyes to Durham’s staff member.

A four day week ended quickly and the majority of the group headed out to Chaminuka Resort; Karthik sticking behind to finish off his dissertation and Alejandro sorting Wallace Tournament fixtures. Anything following Livingstone and the Botswana were likely to struggle to compare, but the safari however was another excellent one, finally getting to see a Giraffe up close and a family of elephants crossing our path.

We finally made it to the Sunday market the following day. I latched onto our ultimate negotiator, Karthik, and somehow ended up with a Zambian football shirt for only K75. A few headed to watch the football at the Mika hotel before ending the week with a trip to see Spiderman at the cinema.