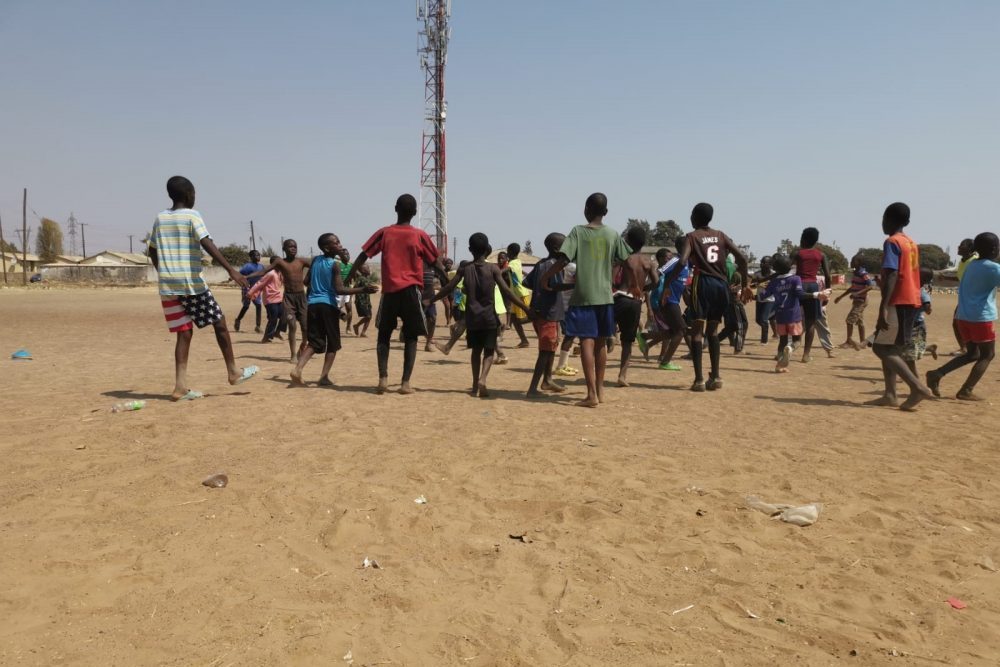 After our first week in Zambia it was time to start placement at our assigned hubs. I have been stationed at the Munali Hub, coaching and conducting outreach for Volleyball alongside Karolina, another volunteer.

On Monday, myself and Karolina made our way to the Munali district with the help of our staff volunteer, Amy. We were introduced to coach George and the peer leaders, Isaac, Gabriel and Venom, who gave us a tour of the area. Munali is the home of the Wallace tournaments due to its size and abundance of facilities – including an athletics track and spaces for volleyball, football, basketball and netball. The courts are surrounded by five schools  – Munali boys, Munali girls, Mumana, Tanduya and Kaunda square. 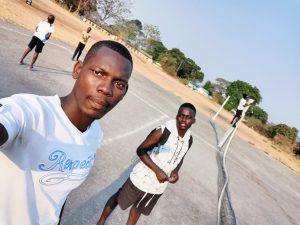 As school was still out for the summer holiday, none of the school hub sessions ran this week, although the Munali hub and talent sessions were still on. We had a chance to meet some of the keen volleyball players – especially Jordan who never missed a session. Unfortunately, with schools being shut not too many of the regular kids came to the Munali hub sessions. This gave us a chance to get younger kids who would play in the Munali fields involved and before long they participated enthusiastically in the sessions.

There were no sessions in the mornings so I had a chance to visit the sites where the other volunteers were active. On Tuesday I went to Fountain of Hope. I met a young boy called Daniel, and after teaching him how to play noughts and crosses he introduced me to some local games using rocks, including a rock throwing and catching game he called “Ciyato”. The day after, I visited the Kalingalanga hub with Ellen and Emily who coach netball. We were greeted enthusiastically on our arrival, and we took out the netballs and started playing with the kids. Not long after I became the kid-sitter for the young boys so that the girls could get on with playing netball. Before long, I had kids climbing on me and making me take part in dance circles singing, “he needs a little pressure”.

Mid-week, I experienced how Zambians finish a football session at the Fountain of Hope, with song chants, dancing and a large cool down circle with a call and response theme to stretch off after. Its amazing how much energy these kids have especially after a long football practice in the blazing sun.

Before long it was apparent how great a coach George is – from his knowledge in volleyball to his style of coaching and his enthusiasm and love for the sport. George does a really good job of making everybody feel included and if someone is struggling, he will take the time to explain until they can overcome the struggle, giving positive praises throughout sessions with lots of high fives. Another of his amazing traits is how good he is with the young kids. All the kids love George, and many run up to give him hugs. A moment that stands out in my memory is when a little boy walked up to the volleyball court on his own, there was no sign of his mother or anyone with him, so we played with him a little to see if somebody came for him. George tried to communicate with him, but the boy could not speak. Not long after, the boy got tired, so George carried him until the end of the session. Before the next session started George ran over to the local villages to see if anybody knew who he was. Luckily, he found 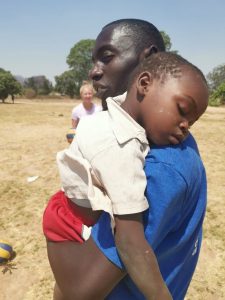 his father. With the multitude of responsibilities George has to keep on top of it’s amazing how he pushes through with a huge heart and is there for the kids of Munali acting as their role model.

With help from the last two volunteer groups, myself and Karolina are trying to further develop the volleyball hub by identifying and upskilling peer leaders and creating a Munali volleyball committee which will take pressure of George and hopefully keep volleyball thriving for many more years at Munali.

To finish the week off we had Zam night. This was a chance to be fully immersed in Zambian tradition. Earlier in the week everybody bought chitenges from the market and the boys took them to the tailors to be made into shirt and shorts. Fully kitted in our outfits we looked forward to traditional Zambian food such as cooked caterpillars, potatoes in groundnut sauce, nshima, a variety of meats and many other dishes. After dinner it was time for dancing, where we took turns dancing Zambian style with a partner. We finished with a clap dance – if you missed the clap the punishment was to dance solo in the middle!

It has been amazing meeting all the Zambians, the kids at placement, the coaches, peer leaders and even the locals who always greet you in the streets. I can’t wait to experience another four weeks in Lusaka!